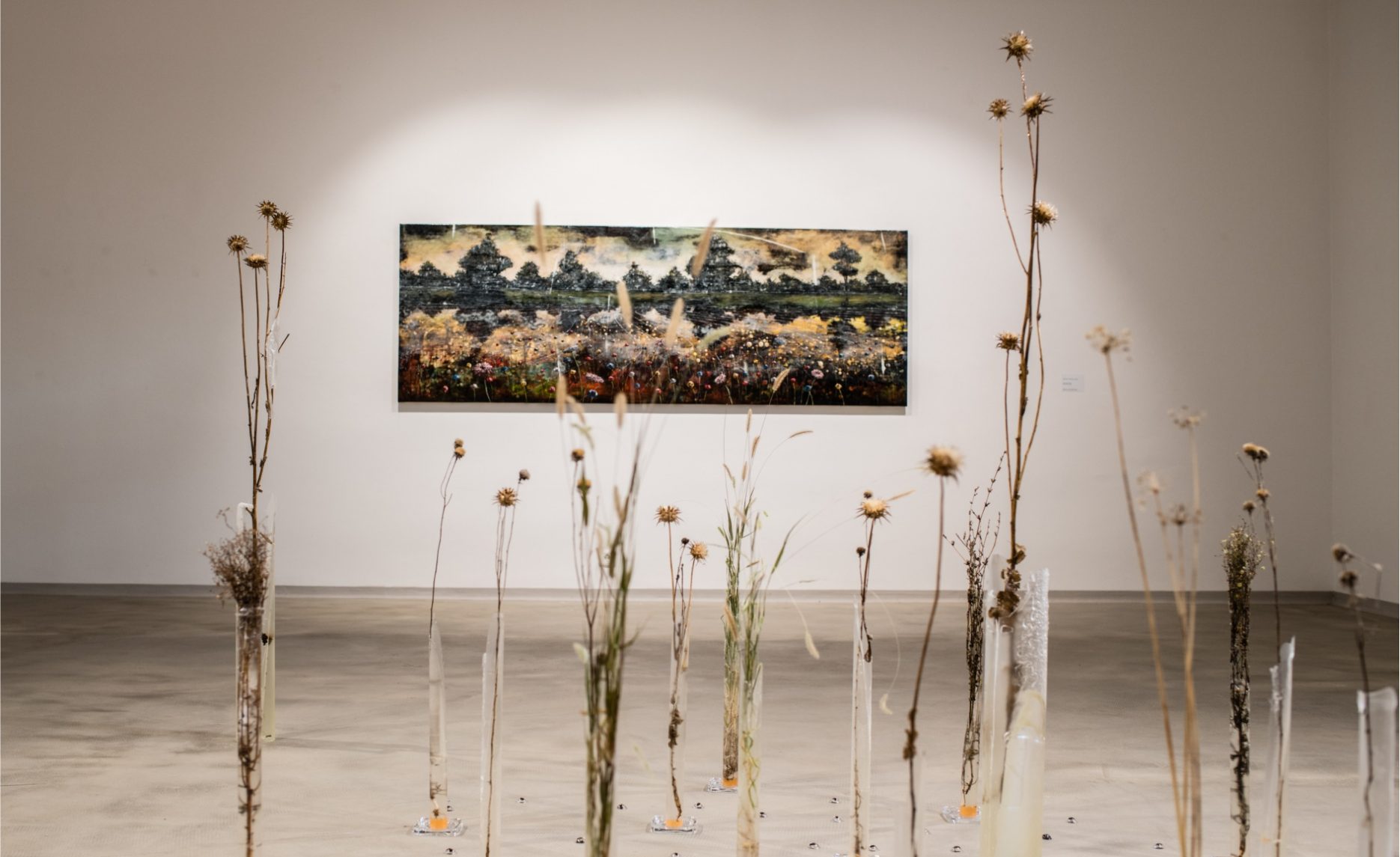 A microcosm to understand the Earth

In the accounts of the painter Jernej Forbici (Maribor, 1980) of his childhood in Strnišče in Slovenia one perceives a sort of magic realism when he tells of his home where the walls were periodically tinged with a light reddish colour caused by the polluting dust carried by the wind, and infiltration caused the water to come out of the taps in the same shade: his home  was in fact imprisoned between an aluminium factory and toxic waste landfills. This seems strange if one thinks of the road lined with thick woods and the gentle green landscape that lead to the small town of just over one hundred inhabitants. A short-circuit that is also found in the landscapes that he has painted for more than fifteen years, from which emerge a disturbing feeling because they present something that is at once very familiar and disquieting.

In works like Hunger – Bitter Symphony  from 2007 a prevalent reddish colour is present, which embodies memories and past sensations, bringing back on the jute canvas the vivid sensation of those harmful materials (it is the colour of the bauxite) that characterized the everyday landscape of the artist. The most interesting aspect of these paintings is that they are derived by an environmental awareness without however falling into a stereotypical visual imagery of the environmental disaster: on the contrary at a casual glance this melancholic territory could appear cloaked with a lyrical sense. The wheat fields that often appear in the paintings show furrows from ploughing that seem like wounds in the earth and above them everything appears dry and infertile, showing the silent but undeniable consequences of man’s actions on the landscape. These rural visions by Jernej Forbici that albeit begin from a microcosm familiar to him, do not have elements that determine an immediate recognisability, because the painter wants to create an imaginary universe on the subject: his birthplace is a pretext to present a series of ethical  amd environmental reflections on the geological age of the Anthropocene period representing instances of global scope.

In Forbici’s paintings and installations a series of reflections unfold, which embrace various disciplines from science to philosophy, vivid examples of which are the two paintings from 2018 Memories I and Memories II which revolve around the Gaia hypothesis, in which the English scientist James Lovelock theorized a self-regulation of the various components of planet Earth to keep the conditions necessary for life intact. Forbici’s paintings include the Daisyworld in a vibrant depiction, the world of black and white daisies that explicates the ability of the biosphere to respond within certain limits to external agents. Another source of prime importance for Forbici’s research over the last few years (stimulated by the collaboration with the Romberg Contemporary Art Gallery in Latina) has been the Natural history by the great Latin naturalist Pliny the Elder. If it is true that «the end of the world has already happened»1 as the English thinker Timothy Morton wrote in his Hyperobjects – with the invention of the steam engine at the end of the 18th century and the 20th century’s atomic experiments (thus indicating the fundamental stages of a process of decline for the Earth) Jernej Forbici reminds us that the virulence of the anthropic intervention on the landscape has far off roots. Indeed in a painting with an evocative title («… once rich in fertile plains and imposing mountains covered with forests, water and abundant pastures, it has now become mostly barren and arid, almost completely devoid of trees with tall trunks» from 2017) there is a bizarre element with surreal features that symbolically could be the eye of history that sees everything, inserted in a landscape populated by trunks of chopped trees in a perpetual repetition of events over the centuries. In the canvas Via Appia (2017), which contains another reference to the Roman intellectual who criticised the excessive construction of roads to the detriment of the vegetation, one can clearly read the dilemma of humankind today suspended between excessive progress (noose, the poet Andrea Zanzotto would have said) and the respect of environmental equilibrium.

The canvasses, albeit in a hermetic and allusive way, are bearers of a series of meditations conducted by the artist that are revealed in the installation My Studio (2018): a contemporary Wunderkammer (Cabinet of Wonders) into which Forbici has poured objects collected during years of wandering in the places (Slovenia, Italy, Germany, etc.) that have inspired his works. In the display cases small works are exhibited, rocks, flowers under resin, powders, that the artist-researcher has collected thus giving an empirical substance to the poetic content of the paintings: it is the desire to show what precedes the painting, a process that unfolds in a plurality of elements where the essence of the traversed landscapes is incarnated. The exhibition path has a fundamental stage in the installation Herbarium, Auri sacra fames (2017) composed of a series of plants collected by the author in his native land (scientifically catalogued with the help of two biologists) that are placed under resin to crystallize the features. The staging of the plant species makes it appear that a broken life is housed  within every box, as in the works of the Frenchman Christian Boltanski for example, which are often dominated by the faces of people who lost their lives in the tragedies of the twentieth century including the Shoah.

The installation has a memorial function because if the factors that lead to global warming are not stopped, it is likely that in a few decades some of these plant species will no longer exist in the territory where they were cultivated. The most symbolic passage of the exhibition is when the viewer crosses a corridor covered with gold leaf that refers to a Latin quote taken from Virgil’s Aeneid, Aura sacra fames: it is an allusion to the detestable character of greed and, in this case, the reference to the idea of ​​the sacred is based on an ambiguous etymology, suspended between the concept of pure and horrid. It is certainly a clear warning as to the way humankind is behaving, in which its economic ‘hunger’ (it is not by chance the Latin expression was cited on numerous occasions by Karl Marx) is threatening the planet’s equilibrium. In this context, those who, captivated,  cross the golden corridor conceived by Forbici suddenly find themselves in front of the canvas The Final Show from 2018, where the landscape is not narrated as a placid expanse, but overwhelmed by a hurricane in which nature shows its power and shows humankind the consequences of its heinous conduct. 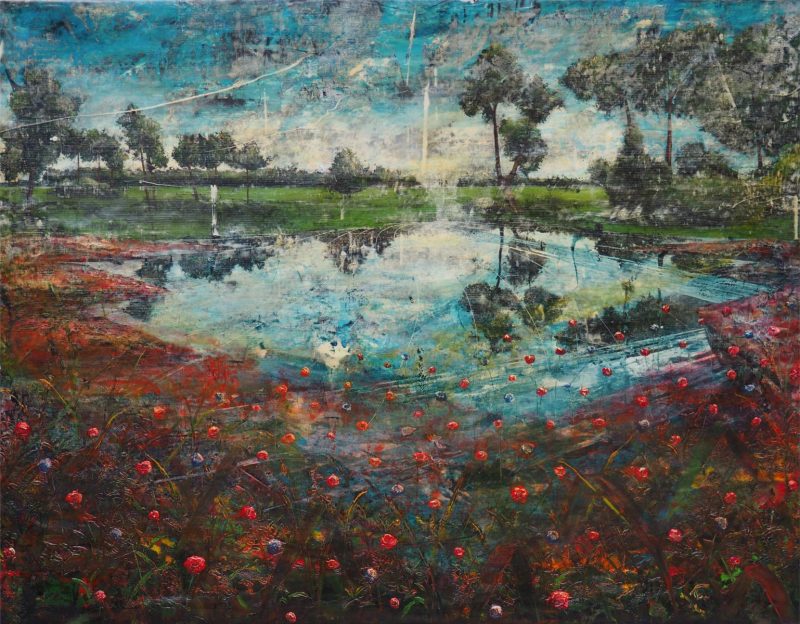 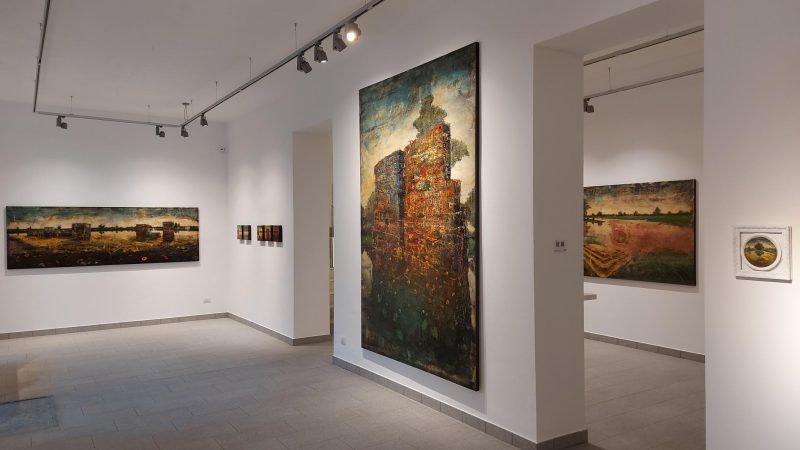