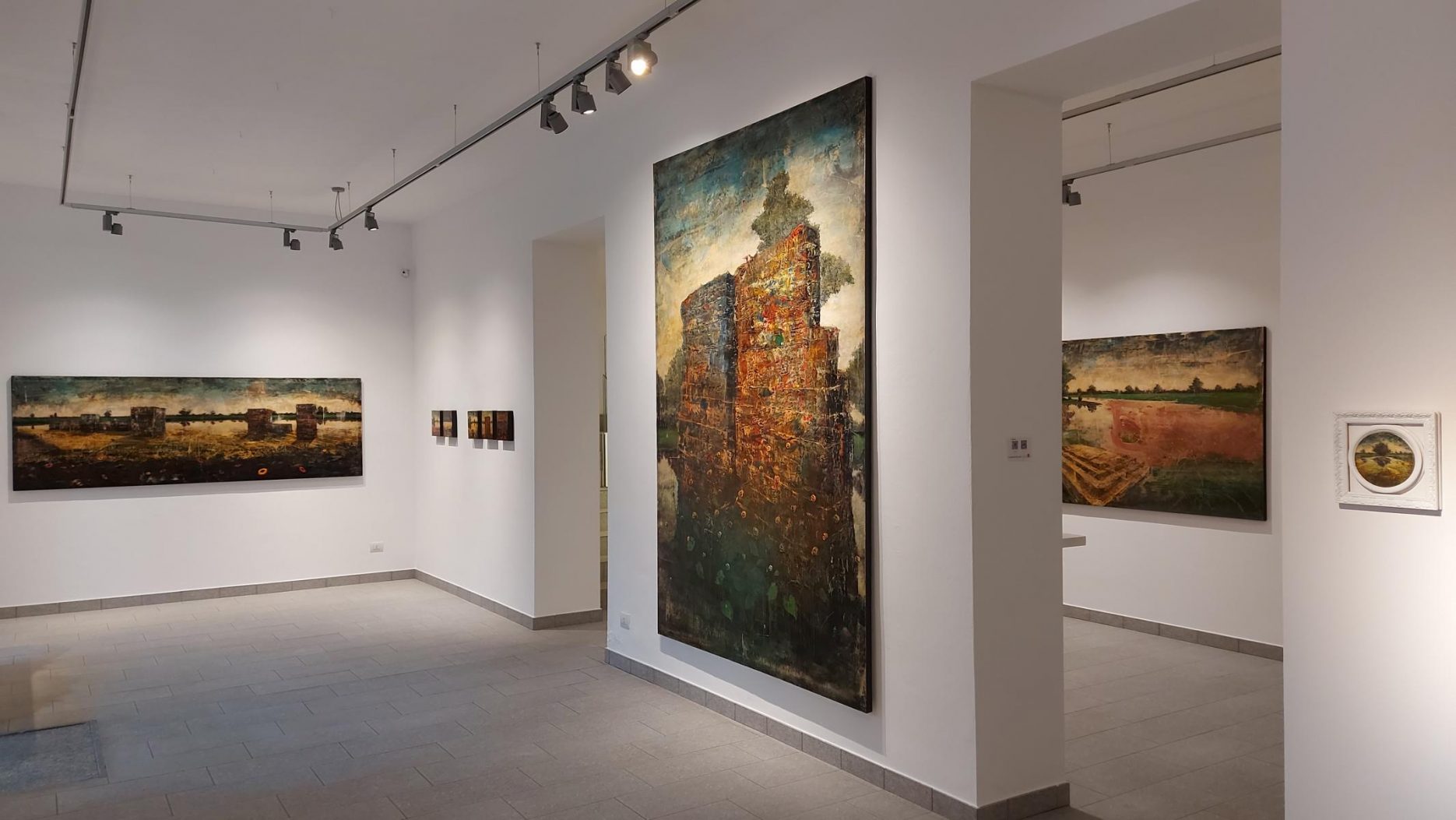 Ha-ha is the surprise result of a new research created simultaneously from the paraphrase of a simple laugh and the reflection of literature which the artist has encountered and dedicated himself to in recent times. If on the one hand ha-ha is a smile, mocking and disturbing nature, which, by reclaiming possession of its space and time, brings into play the entire human and artistic path of the artist, it is also the surprise of being faced with that same ditch (probably today polluted, a strange reddish colour, where colourful plastic flowers emerge) along which stands a wall (now a fascinating huge pile of garbage) which, however, still allows you to look far away, towards the countryside. That territory, garden, exhausted environment, which mankind claims as his own, marking it, fouling it, and which in this exhibition the artist presents to us, portrayed through pollution and rubbish, the result of human action, is rich in profound intentions and a strong primal motivation… /more/

Long Gone was inspired by Forbici’s visit to an altered landscape reminiscent of James Lovelock’s Daisyworld: a computer simulation illustrating his Gaia hypothesis which theorizes the Earth is a closed system whose organisms self-adjust under changing conditions in order to maintain a livable environment. In Daisyworld, Lovelock demonstrated how a planet of black and white daisies slowly became a field of white when exposed to ever-increasing sunlight and heat; eventually, even the white daisies were unable to survive. In Long Gone, Forbici shows us a land of beauty in peril. Like a comet’s last fireworks before it is snuffed out, bright florals burst across his canvases and technicolor lakes shimmer beneath a sometimes acidic sky. His works are textured with smudges, scrapes, and generous impasto. Evidence of the artist’s hand echoes the human impact on Earth—both the good and the bad. Forbici’s world is one of savage beauty. But he is present in every painting and, ultimately, in control of the outcome. Just as we are in our environment… /more/

… The most interesting aspect of these paintings is that they are derived by an environmental awareness without however falling into a stereotypical visual imagery of the environmental disaster: on the contrary at a casual glance this melancholic territory could appear cloaked with a lyrical sense. The wheat fields that often appear in the paintings show furrows from ploughing that seem like wounds in the earth and above them everything appears dry and infertile, showing the silent but undeniable consequences of man’s actions on the landscape. These rural visions by Jernej Forbici that albeit begin from a microcosm familiar to him, do not have elements that determine an immediate recognisability, because the painter wants to create an imaginary universe on the subject: his birthplace is a pretext to present a series of ethical  amd environmental reflections on the geological age of the Anthropocene period representing instances of global scope. … (Carlo Sala) /more/

Being born in a contaminated land either makes you give up or take responsibility. Jernej Forbici chose the second path. Born in 1980 in Slovenia near Kidričevo, a small industrial city which produces aluminium and today is surrounded by toxic waste dumps, Forbici decided to use painting as a form of denunciation, recounting on canvas the battle of resistance which nature carries out in order to regenerate itself and maintain its vitality. The unpublished works selected for the solo exhibition at the PUNTO SULL’ARTE gallery in Varese were divided between two different exposition spaces, because they narrated, also chronologically, a before and an after. The landscape in its current form, compromised by human behaviour and a future in which fauna and flora are only memories visible ‘under glass’… (Ermanno Tedeschi) /more/

BEFORE IT COMES NEXT, Romberg Arte Contemporanea, Latina (IT), OCT 2017

Jernej Forbici focuses his research around ecological themes, declinated in pictorial traces and installation sequences. A metabolic and responsible process, where the subject of ethical tension is resolved through visual prefigurations, elaborated with foresight and ecological memory, portent and management of the consequences. His images are fluctuating and unstable, densely layered, on the dissolved boundary between solid, liquid and gaseous. The visual process becomes mimetic, as if the work metabolised the prefiguration and indicated the hypothesis of a plausible future. A work that turns into a visual thermometer, a sort of absorbent matrix that releases alkaline memory on the acidic imprinting of the present. Forbici’s painting is one that stratifies and thickens, lightens and expands, creates discolouration and sudden brightness, moving with the capillary methodical of the real landscape, following the events of History and the possibility of a future without history. … (Gianluca Marziani) /more/